The most important lesson my dad taught me was the importance of daily mass. I hate New Years resolutions because I think one sets oneself up for failure by tying his resolve to an arbitrary date. However, in this new year I make this commitment anew. Two days in and still holding. My prayers are for my wife and children, my future students, Archbishop Vigano, and each of you reading. 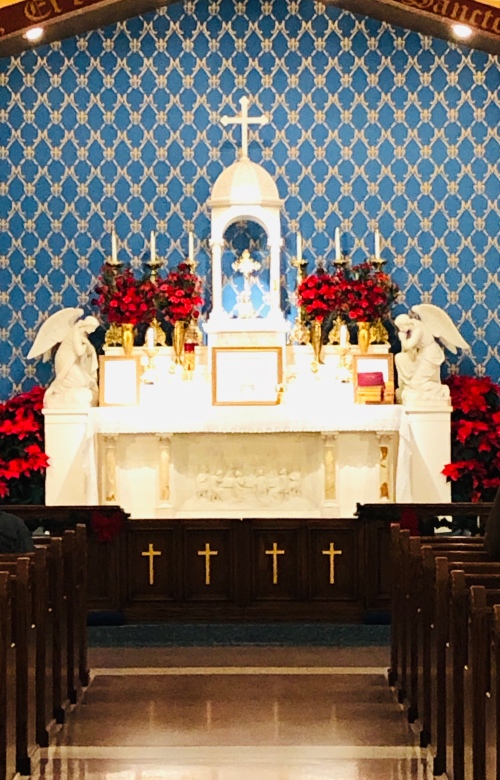 Beauty ever ancient, ever new!

On January 1, 2011 I launched (in earnest) this blog. True, I had been writing it for a few years and had been posting it to WordPress for a few months; but on that day I started down the path of regular posting. WordPress ran something called the “Post-a-day Challenge” and encouraged new(er) bloggers like me to post something every day. They even provided us with nifty little prompts to get started. When I re-read some of those posts I laugh at how closely I stuck to the script. Nonetheless, I’m happy to have gotten in the habit of regular posting.

Would you believe that in that first year I did NOT hit my goal of a post every day? Taking time out of my busy life to, I don’t know, move my family across the country that July got in the way and, although I tried to recover, I was only able to sporadically post for the remainder of the year. Still, I feel like some of my best posts were from that time of transition.

In 2012, now, I DID manage to post every single day. I don’t know that this made me a better blogger. I feel like a lot of what I was posting was simply filler, stuff posted because I needed to write something – not unlike half of A Tale of Two Cities. As time went on I went back and forth with the idea of what it means to post with regularity and what it means to post meaningful content.

In 2018, for instance, I posted 47 times. Two of those posts I have since made available only to a small group of friends because they really pertain only to those people. 26 of the 47 posts relate to Theodore McCarrick and the Church crisis. In fact, the 21 posts from January – July are actually (in my opinion) a portrait of a man who, though struggling with a recent bad turn in his career, is happy with life, happy with his family, finally achieving a goal of getting in really good shape, more and more accepting of God’s will, and trying to practice ever more the virtue of gratitude. On that point I will write more later. (Note to self: write a post on gratitude.)

Then the whole world broke open and the McCarrick mess spewed forth like a busted sewer line. I didn’t want to deal with it any more than anyone else but when a sewer line breaks you gotta’ clean up the toxic sludge. So my writing took a turn. That is all.

Today we begin a new year. The calendar turned over at midnight. I am excited at the new role I’m stepping into with my career (more on that later) and I’m excited at where the next 12 months will bring us. Do I still have that goal of becoming a world famous blogger? Always. It’s a dream of mine, really, only one that is now also tinged with the desire to be a published author. I’ve got several projects in the works.

But for now, it’s a holy day and this Catholic dad-blogger needs to get himself and his not-so-little ones off to mass. When I return, I’ll tell you (my children AND my readers) what goals I achieved last year and what goals I have laid out for this year.